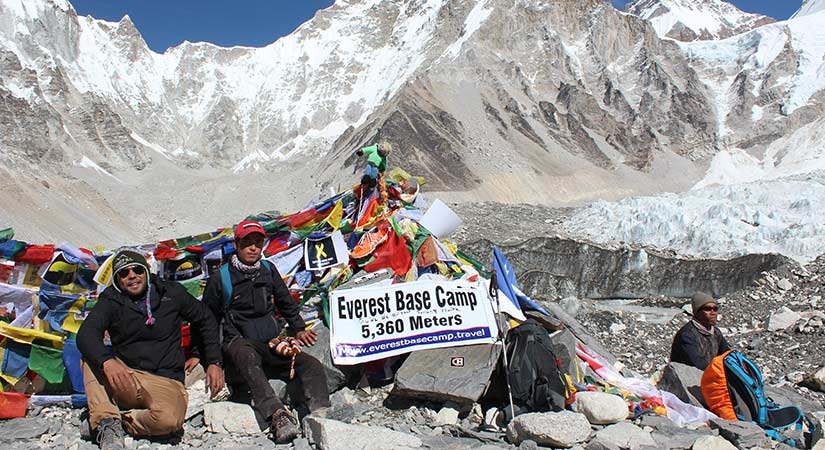 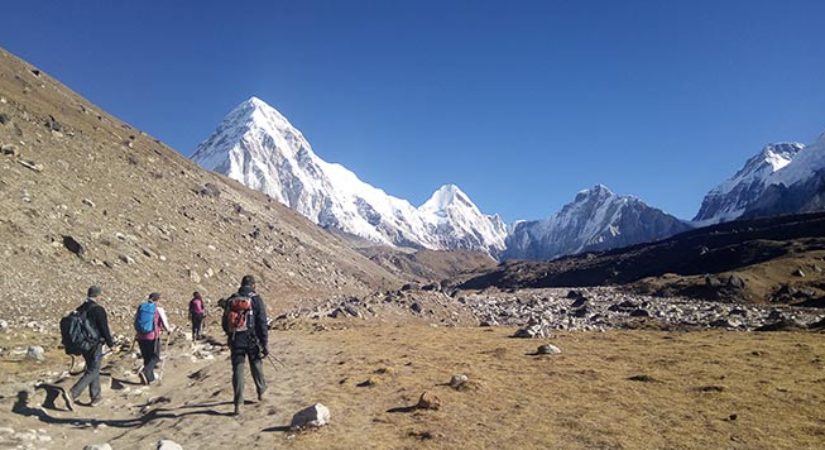 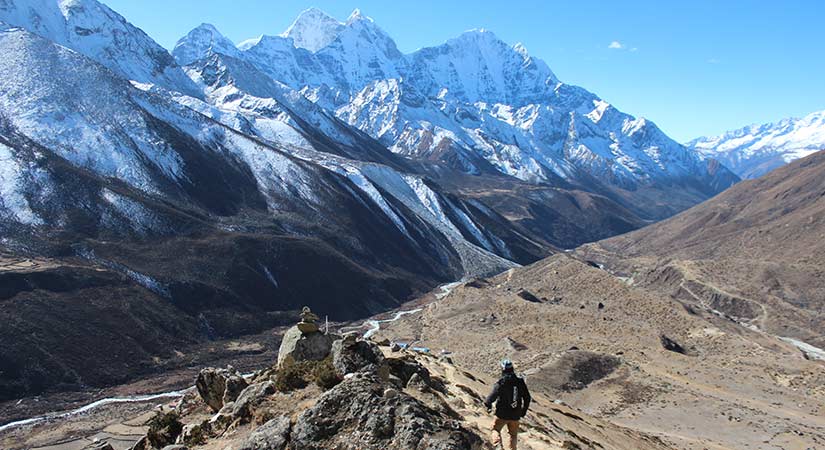 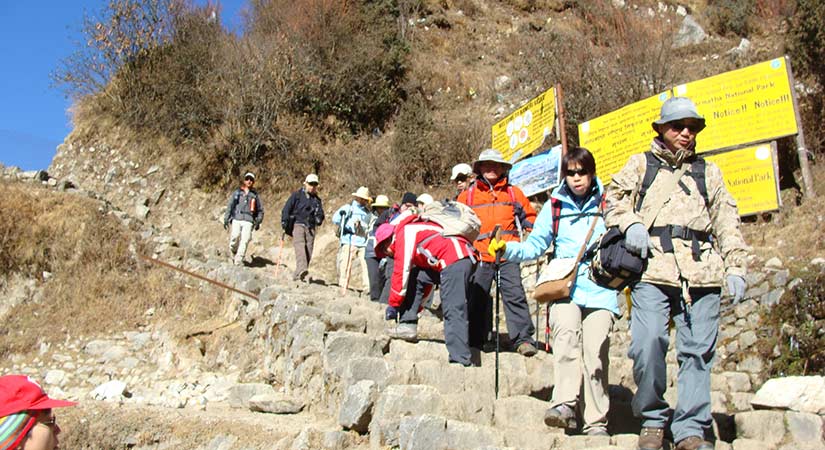 Why Everest Base Camp Trek with Island Peak climbing?

Everest Base Camp Trek with Island Peak climbing is a standout among the best trekking route and furthermore mainstream trekking locale in Nepal and it has enormous ice sheet called Khumbu Glacier just as extremely well known Island top en route to Everest base camp, we take an energizing trip by little plane to Lukla and trek up to Namche through Sherpa town, Dudh Koshi river and pine timberland en route. Following two days strolling from Lukla you will Arrive at Namche Bazaar which is a focal place of the upper Khumbu district to supply the products to the upper towns.

When you are there at Namche you get the opportunity to see the perspective of Mt. Everest, Amadablam, Thamserku, Kogde, Kusum kangaroo and a lot more mountains that you can see from Namche Bazaar.

The path up to Everest Base Camp Trek with Island Peak climbing isn't that difficult to go but since of the elevation you truly must be in same speed to be fine for the entire span and en route you can visit extremely a pleasant cloister, for example, Tengboche religious community, Pangbuche religious community, Debuche religious community so on.... We proceed to trek to Pheriche and rest day is required in Pheriche to adjust and it causes you to be in base camp and to rest at Ghorkshep, which is 5,180 m where we need to rest one night. The view from Kalapather and the base came is so dazzling, at that point trek down to Dingbuche which is lower than Ghorakshep, it implies you can rest effectively, and you must set up for island top which is 6100 m.

Island crest was the name given to the mountain in 1952 by Eric Shipton's, who thought it to be reminiscent of an island in an ocean of ice. It is otherwise called "Imja Tse" in Sherpa Name. There's nothing more needed than 3 to 4 days from Dingbuche town to go there over island crest and back to Dingbuche with climbing aide and aide. This is one of the gutsiest treks incorporate climbing island peaks. It is relatively an adventure hike throughout the massif Everest Himalayan range where you should take care and need to follow the proper itinerary to be safe and not to have mountain sickness while trekking.

The Everest Base Camp Trek with Island Peak climbing is twin in one trek cause is same time you can get the Everest base camp, which is 5,360 m and obviously island top for satisfying your powerful urge to be over Island pinnacle and island top isn't that hard to contrast with different mountains in Everest district. The schedule can change cause there are numerous option trekking Path.

Day 14: Trek from Namche to Lukla

Day 15: Fly to Kathmandu in the morning

Upon your arrival in Kathmandu TIA airport, I will manage your pick up service from Airport to your Hotel. It is about 25-minute drive from airport to the center of Kathmandu. Once you enter Hotel, you can have a rest and be refreshed than after while we can meet again for trip discussion and welcome dinner at local Restaurant.

Today, we are leaving quite early from the hotel because our Lukla flight starts early in the morning. It is a majestic flight about 30-minute to Lukla than we follow the gradual walk along Dudh Koshi and passes Chheplung, Ghat, Dhado Koshi Sherpa villages including typical farmland and Buddhiest Chorten.

Trekking from Phakding to Namche quite long walking a day, but it is the best walking day as it is scenic Green valley and beautiful area. The first 3 hour walk will be easy walk passing some suspension bridges, Traditional Sherpa house, and farming, forest etc. 3 hours walk, take us to Manjo where we have to check our permit and continue to Namche Bazaar. The last 2 hours will be uphill walking through the forest and also we can see Mt. Everest and Lhotse, which are the world’s highest peak. Namche Bazaar is a big Sherpa residential area, it has about 60 lodges and small inn and some banks, Pub and supermarkets. It is a beautiful village. Overnight at Namche Bazaar.

Today we have the easy day we just walk about 2 hour sight trip for Acclimatization and back to the Hotel. If you are interested to visit the Sherpa museum, Mountaineer's photo documentary, Everest viewpoint and wonderful many high mountains around.

After breakfast, we begin our trek to Taguchi. The first 15 minutes we have to ascend from the lodge, and we just follow the wide walking road till Sanasa which is about the 1.30-minute walk and in between we can see Mt. Ama Dablam, Thamserku, Kusung kangaroo, Kogde, Tawache, and many other small snow cap mountains. When we reach Sanasa we follow the small trail descending to Funki thang which is rocky and sandy small trail going through the pine forest to Funki Thaga where will stop for lunch after that we have to climb 1.30 minute to 2 hrs through the pine forest Than we reach Tengbuche where we will spend a night. It is a small area has 5 lodges but it is one of the best settlement of Everest trek to see both side spectacular mountain views including mt. Everest.

In the early morning we can see a perfect view of Everest and many other mountains from Tyangbuche, so we can have breakfast with wonderful world's highest peak Everest and after breakfast, we start to walk towards Dingbuche valley. We will follow the natural walking route at the beginning from Tyangbuche way down to Debuche about 15 minutes. Debuche is an alternative place to stay instead of Tyangbuche when there are many trekkers.

The walking route will be easy after debauched to the bridge about 30 minutes than we have to ascend about 40 minutes to reach Pangbuche, it is a big Sherpa village and has many lodges to stay. Our walk will continue after Pangbuche to to Somare where we will take our lunch after that we just follow the easy trail and open wide area till we get the next bridge over the river ,then another 15-minute short climb and the 10-minute gradual walk takes us to Dingbuche where we will stay overnight. This is one of the best days because during this walking time we may see some musk deer, Himalayan Thar, and Yaks.

Dingboche is already a high place nearly (4,400 meter) so if we continue our walk to next settlement without spending the extra night we might get mountain sickness so it is suggested to everyone to get rest there for two nights. This day we will climb Nagarjuna hill behind Dingbuche about 2 hours to get the higher list (3,000 meters) more than hotel than we will go back to our hotel. When we reach the top of Nagarjuna hill we will get a spectacular mountain views and wide valley view makes us that is heaven.

We begin our day early again after breakfast in the Tengboche hotel. As a whole, this day is not so long to walk but because of the altitude, we have to walk slow and takes time to reach Lobuche. The first 3 hour walk will be wide valley walk till Shukla (4,645 m) then we have to climb straight about 40 minutes to the memorial hill, it is a better place for a photo shoot and valley view than after the trail will be easier to walk through the valley about 1 more hour from the memorial hill than we will reach Lobuche. Lobuche is a small area has 7 lodges with similar accommodation and price as usual. We spent one night there.

Trekking from Lobuche to Gorakshep will be pleasant each step we push towards Gorakshep because we can see Khumbu glacier, Mt Everest, Mt Pumori, Chaggatse, Nuptse, and Neighboring mountains. About 1.30-minute we just walk on the flat trail and about 1.30-minute walk we have to cross rocky paths but it is gradually and easy walk. When we reach Gorakshep we will get our Lunch and Accommodation just to be confirmed for the night to sleep because there are just 5 lodges so after lunch at Gorakshep we will go to EBC with a day bag. The rail to EBC is not so steep it is gradual up, but many zigzag trails and rocks. It takes about 2 hours to go and two hours to go back to the hotel at Gorakshep. Overnight in Gorakshep.

From Gorakshep, we are hiking to Kalapathar very early morning fur majestic Everest panorama and entire whole mountain of Khumbu region. Kalapathar is located on the high top hill at (5, 550 m), From where you can feel the vibration of nature including world's tallest mountains. The best spot to see the clear view of Mt. Everest. Is here at Kalapathar and also the Mt. Pumori, Khumbu ice fall, Glacier and rolling white mountains in the south.

From Kalapathar, we descend to Gorakshepa, take some food than we take the same trail until Dhugla then the next we follow the upper lining small trail on a cliff of the mountain than reach Dingboche. Our team stays in the lodge at Dingboche.

DAY
11 Trek from Dingboche to Island Peak Base Camp

It is most exciting day on this trip, that will take you to the higher elevation and no doubt on the top of Island peak. We follow the rules and ideas from the experienced climbing guide, that way we climb the peak at the middle of the night and react to summit and admire the real beauty of the White mountains in Everest region then descends to base camp and retrace our steps to Digboche. We stay at the lodge and enjoy the proper meals.

From Dingboche, we begin our journey after breakfast. Our first 20-minute walk from here going to be along the valley of Imjaste, the next we cross a small bridge over the suspension bridge and short ascending to the main trekking route than retrace our steps to Namche Bazaar. We will have a beautiful night and proper meal today at Namche Bazaar.

DAY
14 Trek from Namche to Lukla

It is our last day to walk in the Everest region. We follow the same path we took when we were trekking up to Namche Bazaar. It is our relatively long day, but will be much easier to walk because of low elevation. However, our first 1-hour trip from Namche will be steep down through the forest of Pine than cross Dudh Koshi river over the high bridge that we follow the small gradual trail and again passing a couple of the bridge than reach Manjo. It is where we have to check out our trekking permit at Sagarmatha National park than just retrace our tired legs to Lukla. We spent our final night in the mountain and farewell dinner all together.

DAY
15 Fly to Kathmandu in the morning.

We are finally flying back to Kathmandu after almost 2 weeks adventure walk. We take an early breakfast than a short walk to Lukla takes 5 to 10 minuter than we fly from Lukla airport to Kathmandu, takes (30-minute) than drive to your hotel straight. The trek is over today.