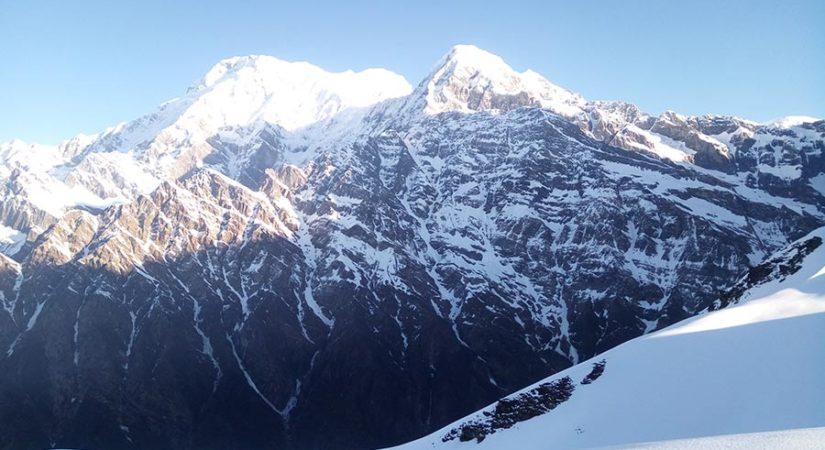 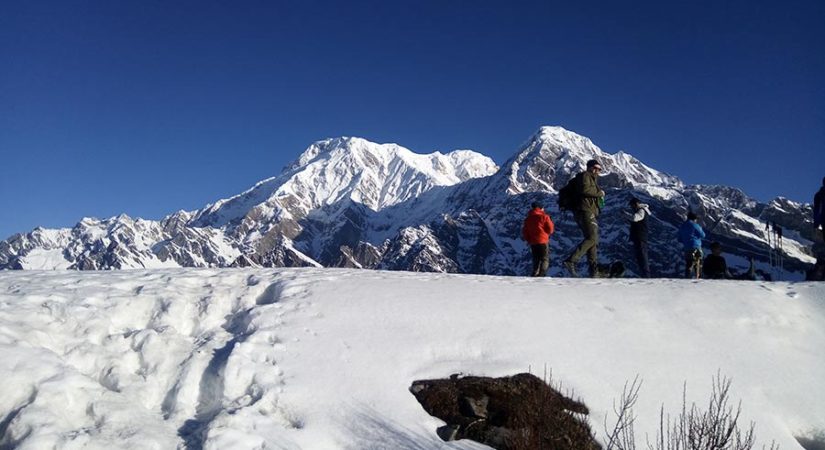 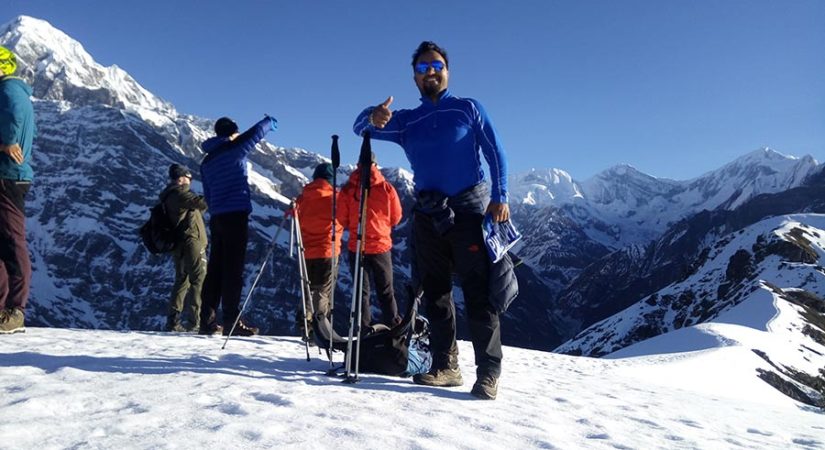 Mardi Himal Budget Trek is a stunning journey through the tranquil mountains of Nepal. This trek offers a diverse range of landscapes, from dense forests and alpine meadows to snow-capped peaks and glaciers. Mardi Himal trek is a relatively new and off-the-beaten-path trek that has become increasingly popular in recent years. The trek starts from the bustling city of Pokhara, which is famous for its stunning lakes and panoramic views of the Himalayas.

During the Mardi Himal Budget trek, you will pass through picturesque villages like Low Camp, Forest Camp, and High Camp, each offering its own unique experiences and breathtaking views. The trek also offers opportunities to explore traditional cultural practices and the local way of life. The local villagers are warm and friendly, and many trekkers form lasting connections with the people they meet along the way.

Mardi Himal Budget trek is a true adventure for those seeking a unique and challenging experience. Whether you are a seasoned trekker or a first-time hiker, the Mardi Himal trek offers a once-in-a-lifetime opportunity to immerse yourself in the breathtaking beauty of the Nepalese Himalayas. With its diverse landscapes, rich cultural experiences, and breathtaking views, the Mardi Himal trek is a must-visit destination for anyone traveling to Nepal.

The Mardi Himal trek is a popular trekking route in the Annapurna region of Nepal, which offers breathtaking views of the Himalayan ranges. The trek is usually done between September and June, and the weather and temperature during these months can vary significantly.

September to November is considered as the best time to trek Mardi Himal, as the weather is clear and pleasant. During these months, the temperature ranges from 10 to 15 degrees Celsius during the day and 0 to 5 degrees Celsius at night.

December to February is the winter season in the Mardi Himal region, and the temperature drops significantly during this time. The temperature can reach below 0 degrees Celsius at night, and the weather can be harsh and unpredictable.

In conclusion, the best time to trek Mardi Himal is from September to November, when the weather is clear, and the temperature is pleasant. However, those who are looking for a challenging trekking experience can opt for the winter months, but it is advisable to be well-prepared for the harsh weather conditions.

Most Popular trekking trails in Annapurna region ,You may like:

Get a customized Nepal tour itinerary tailored to your interests and budget. Contact Nepaleverestguide@gmail.com now for a flexible itinerary and competitive prices.

Driving from Pokhara to Kande is approximately a 1 hour journey by road. From Kande, you can continue your trek to Pitam Deurali which is about 3-4 hours of moderate walking. The trail from Kande to Pitam Deurali will take you through beautiful landscapes and small villages, offering stunning views of the Annapurna range. You can either choose to camp overnight at Pitam Deurali or continue your trek to the next destination. It's recommended to properly acclimatize, carry enough water and food, and be well equipped with appropriate gear for the trek.

Today we will embark on the popular Annapurna trail after having a hearty breakfast at the lodge. The trail from Deurali to the Rest Camp is a relatively short and grassy path with no tea houses along the way. To ensure you have enough sustenance during the journey, it is recommended to have a heavy breakfast at Deurali and bring along snacks such as chocolates and biscuits. The journey to the Rest Camp will take approximately 5 hours and will be a gradual uphill trek through a lush and dense forest. Make sure to carry sufficient drinking water as the trail is entirely surrounded by forest. You will spend the night at a Tea House.

The trek from Rest Camp to High Camp is a challenging yet rewarding journey of approximately 4,200 meters in elevation. As you make your way up the mountain, you will be treated to stunning views of the surrounding mountains and valleys, including the Annapurna South, Hiunchuli, and Mardi Himal peaks. Along the way, you will walk through lush forests of rhododendron and bamboo, terraced farmlands, and quaint villages, with the occasional wildlife sighting. The trail is quite steep in some sections, so make sure to take regular breaks to catch your breath and take in the breathtaking views. As you reach the High Camp, you will be rewarded with stunning panoramic views of the Annapurna Range and the Manaslu Range.

Today marks the end of your journey on the Mardi Himal trek. You have likely had a beautiful evening at Sidding village, which is renowned for its breathtaking scenery. Before departing, you will have breakfast and then embark on a 3-hour drive to Pokhara, along the river and through colorful villages. Upon reaching Pokhara, you will have a farewell dinner with your guide, porters, and other members of your trekking team. This is a great opportunity to express your gratitude and bid them farewell. You will spend the night in Pokhara.

"Attention trekkers! If you're a student, budget traveler, or researcher, Mardi Himal Trek in Annapurna is a must-visit for its abundant natural beauty. Nepal Everest Guide is offering a 15% discount in 2023, so BOOK NOW and embark on an unforgettable adventure. Don't miss this opportunity to explore the breathtaking Mardi Himal trek."

What is Mardi Himal Trek?

Mardi Himal Trek is a popular trekking route in the Annapurna region of Nepal, offering stunning views of the Himalayas and diverse landscapes.

​How difficult is Mardi Himal Trek?

Mardi Himal Trek is considered a moderate trek with some challenging sections, particularly during the ascent to the Mardi Himal base camp.

​How long is the Mardi Himal Trek?

The Mardi Himal Trek typically takes 5-7 days to complete, depending on the starting and ending points.

​When is the best time to trek Mardi Himal?

The best time to trek Mardi Himal is from September to November and from March to May, when the weather is clear and the views are best.

Accommodations during the Mardi Himal Trek are usually in local teahouses or lodges, with basic but comfortable rooms and shared bathroom facilities.

​Do I need a guide for Mardi Himal Trek?

It is recommended to hire a guide for the Mardi Himal Trek, as the trail can be challenging and navigating it independently can be difficult.

​What should I pack for Mardi Himal Trek?

​How much does it cost to trek Mardi Himal?

The cost of trekking Mardi Himal varies depending on the length of the trek, the services you require, and the season, but it typically costs between $500 and $1,500.

​How fit do I need to be for Mardi Himal Trek?

To complete the Mardi Himal Trek, you should have a good level of fitness and be able to hike for several hours each day.

​What permits are required for Mardi Himal Trek?

The Annapurna Conservation Area Permit (ACAP) and the TIMS card are required for Mardi Himal Trek.

​What is the highest elevation on the Mardi Himal Trek?

​What are the most spectacular sights to see on the Mardi Himal Trek?

The most spectacular sights on the Mardi Himal Trek include the Annapurna range, the Machhapuchhre peak, and the Mardi Himal base camp, as well as the diverse landscapes and traditional villages along the trail.

​What are the recommended food during Mardi himal trek?

During the Mardi Himal Trek, it's important to eat nutritious and calorie-rich food to fuel your body and maintain energy levels. Here are some recommended foods to eat during the trek:

Porridge and muesli for breakfast

Lentil soup, dal bhat, and curries for lunch and dinner

Snacks such as trail mix, energy bars, fruit, and nuts

Hot drinks such as tea, coffee, and hot chocolate

It's also important to drink plenty of water throughout the day to stay hydrated. The food options available during the trek are limited, but you will find basic Nepalese dishes and some Western options available in the teahouses and lodges.

​If i need emergency help incase what to do?

If you need emergency help during the Mardi Himal Trek, it is important to take the following steps:

It is important to have comprehensive travel and medical insurance before embarking on the Mardi Himal Trek, as medical facilities and rescue services may be limited in remote areas. Make sure you have a basic first aid kit and know how to use it in case of an emergency.

​Can i go to Annapurna base camp after Mardi himal trek? If so how to go ?\

​What is the freelance/independent guide salary per day for Mardi Himal trek?

The salary of a freelance or independent guide for the Mardi Himal Trek varies based on several factors, including the guide's experience, qualifications, and language skills. In general, the average daily salary for a freelance guide in Nepal is between $30 to $50 USD. However, this can be negotiable and may vary depending on the guide's level of expertise and the services they provide. It's always best to discuss the salary and terms of the agreement with the guide before starting the trek.

It depends on what you're looking for in a trek. Both the Mardi Himal Trek and the Ghorepani Poon Hill Trek have their own unique features and advantages.

On the other hand, the Ghorepani Poon Hill Trek is a short and easy trek that is popular for its panoramic views of the Himalayas, including Annapurna and Dhaulagiri. It is a good option for those who want to experience trekking in the Annapurna region but have limited time and don't want to do a more strenuous trek.

In conclusion, both treks have their own merits, and the best one for you will depend on your interests, fitness level, and trekking goals.

​Who invented mardi himal trek at the beggining?

The origin of the Mardi Himal Trek is not clear, but it is believed to have been explored by local villagers and trekkers in the Annapurna region of Nepal for many years. It was not widely known to the international trekking community until recent years, when more trekkers started to venture off the beaten path in search of less crowded and more remote trekking destinations.

The development of the Mardi Himal Trek as a commercial trekking destination is largely due to the efforts of local trekking companies and guides, who recognized the potential of the area and started promoting it to international trekkers. It is now gaining popularity as a unique and scenic trek in the Annapurna region of Nepal.